Brendon in Aruba with Mom 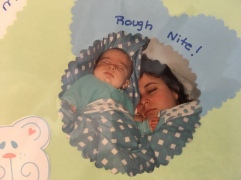 A few weeks ago, I got an instant message from a friend of mine. She wrote … “Saw Brendon’s post and it’s so sad”. I replied … “What Brendon post are you referring to”. And she said … “He had a post I saw today with photo of note left from Lynn and about depression. Please don’t get upset with him.”

I went to my son’s FB page and didn’t see it. I tried to check his Instagram account … but I had been blocked from following him. I asked another friend who could follow him to take a screen shot of his post and send it to me. A few minutes later … I get a series of screen shots and the first thing I see is Lynn’s note …the final words that my wife, my boys’ Mom had communicated to us on display for the “world”. To see the note on a social media platform caught me totally off-guard … I wasn’t prepared to share my wife’s final, brief words with the whole world.

Now what followed the image of the note was an amazing poem written by Brendon … pouring his heart out in an attempt to describe to people what it’s like for a young man who battles depression to deal with the loss of his Mom, who he so heavily relied on … his emotional rock, to suicide. I was truly moved by Brendon’s poem … but as I said I wasn’t comfortable sharing her note.  So I tried calling my him … no answer. Then I sent him a text. I explained in the text that I thought he did an amazing job with the poem but I asked him to remove the note … that was private, that was for us. Within minutes I got a response (amazing how promptly young people reply to text) and  Brendon wasn’t at all happy with my request to remove the image of the note from the post. Let’s just say he let me know in no uncertain terms that … he had no intention of taking the note down as the words didn’t have the same meaning or impact without the note. He reminded me that I chose to be open about our tragedy … to raise awareness about depression and suicide. He texted me “I thought you wanted to be open about this? I thought that you wanted people to really see? So I’m ___ showing them. So don’t be a hypocrite.”

After some back and forth and some time to let the initial shock wear off … I texted back that it was his right to post it. In fact, after sleeping on it, I asked him if I could use his post on this blog … “you want to show them what it’s like … right?”.  As for the note, it’s still not something I want to share broadly … so I won’t. But I do want to share Brendon’s poem because I think it provides incredible insight into “the pain” of a son who so loved and relied on his amazing Mom.  And I think he’s extraodinarily courageous for putting himself out there in such away …

Look after reading Brendon’s words there’s really not much else to say. For those parents out there, I know you can appreciate how difficult it is to see your child hurt and to struggle. And given our circumstances it’s especially hard … and frightening. I’ll never have the insight that Brendon has to this terrible disease … depression. I’ll never be able to relate to him like his Mom did.

But, Brendon, that doesn’t mean that I love you any less than your Mom did or won’t do everything I can possibly do to help you. I love you, son.