Well I thought I’d take a little different approach for this post … I’m going to provide some practical advice on cooking … yep, cooking.

But first let me give you some background for context. For those of you who knew Lynn, and as I’ve described before, she was a woman of many talents. She was a gifted physician’s assistance, talented with arts and crafts, an incredible home decorator, a terrific cook, and so much more. Lynn and I loved to entertain and she never ceased to amaze me with how easily she made it look to throw together an incredible meal. Whether it was a big holiday feast, a dinner party, a backyard cookout, or coffee with the ladies … she had a knack for putting out a great spread. Now, it wasn’t all Lynn and I admit I’ve never been much of a cook but I did develop some skills on the grill … steaks, burgers, fish, chicken, etc. And over the years Lynn and I made a great team … with Lynn as the “architect” of the event and me playing my role as “grill master” … we got pretty good at pulling together a nice party in really short order.

After Lynn passed, I didn’t have a lot of motivation to cook or grill.  For one, as I said, I wasn’t much of a cook and two I didn’t have my partner playing her leading role to create a fantastic meal. As a result, I was constantly eating out. Now don’t get me wrong … when Lynn was alive we used to enjoy dining out or getting takeout from local restaurants.  But this was different … I was eating out (and drinking) every night which I know just wasn’t healthy but it was easy, convenient.

Through this brutal journey, I’ve been amazed where support has come from. In one particular case, a friend, Kathleen, from high school, that I hadn’t talked to in over 30 years reached out to me. Kathleen caught on to my eating out habit and encouraged me to start cooking for myself and introduced me to Blue Apron … she even sent me a coupon for a free meal to get started. So, I placed my first order and a few days later a box shows up with three meals. Now remember … I was the “grill guy” in my previous life. So, as I’m reading through the recipes and cooking instructions, I’m coming across all sorts of terms that were totally foreign to me like … whisk, zest, core, or smash and peel garlic (come on, how was I supposed to know that little trick of smashing the garlic glove with the side of a big knife to make it easy to peel) … I had no idea what they were talking about. But all was not lost … because in this day and age you have all sorts of options to figure this stuff out.  You can use an old-fashioned technique like … phone a friend or relative who knows their way around the kitchen … or you can go “digital” and look it up on Google or YouTube. I utilized both … I remember calling my sister in-law, Jan, and asking … “how do I core an apple”. After a chuckle she patiently explained to me what tool I needed to find in Lynn’s well-equipped kitchen and how to use it. Now, more often than not I’d resort to Google or YouTube … and there I’d be in the kitchen staring at my Mac or iPhone placed prominently on the center island looking at pictures or following a video. But it was effective and after quickly getting educated … I was whisking, zesting, and smashing garlic like a champ to create some truly tasty meals.

Well, I must admit, I was pretty proud of myself putting these meals together … they looked good and tasted great. And on occasion I’d snap a picture of my “masterpiece” and share it with some family and close friends. I guess my buddy Bob must’ve gotten sick of my bragging because after sending out a picture recently in a group text, he says … “what’s the big deal, it’s like painting by the numbers”. Not only did that hurt my pride a little bit but I also beg to differ. The way I look at it, the only difference between preparing a meal via Blue Apron and cooking from a recipe is someone did the shopping for you … but you still have to put it together and cook it. So, in response to his condescending snippet, I followed up with a quote from a famous philosopher who said “… if one follows a recipe and creates a wonderful meal … did “one” not create a wonderful meal?!” Ok I totally made up the quote … but it’s a fair point, right? 😂

As I noted earlier … I’m pretty good with the standard stuff … steaks, burgers, fish, etc. Although, I must admit my “specialty” is lemon pepper wings. Lynn, I and the boys used to go to a local restaurant when we lived outside of Atlanta that had these great lemon pepper wings. After moving to Houston, we were hard pressed to find a suitable replacement. So, I set out to create my own … but not fried, grilled. Lynn found this really good rub at our local supermarket and we were off to the races. Just season them up with the rub … throw them on the grill and voila … you’ve got about the tastiest wings you’ve ever had. I kid you not … family, friends, my kids’ friends, work colleagues “beg” me to grill them these lemon pepper wings. (Hang in there to the end of this post and I’ll reveal the secret … or at least part of it).

OK, I’ve got the basic grill covered and my much sought after lemon pepper wings but I wanted to expand my game. Living here in the South you hear a lot about smoking meats but I always perceived it to be too complicated. Well that was soon to change. One night late last summer, I had some folks over for drinks and dinner. Now in the new normal … the process of throwing a dinner party has changed. I rely more heavily on “participants” to take part in creating the meal. I typically commit to providing the grilled meat and the wine (shocker, right?) and look for others to bring sides and dessert. On this particular occasion, my builder, Whit, offered to bring some smoked meats … pulled pork and brisket that he’d cook on his Big Green Egg (BGE). So, after some drinks and appetizers, it’s time for the main course. The smoked meats looked and smelled incredible … I couldn’t wait to dig into them. Well, I wasn’t disappointed … they were so good … juicy, tender, flavorful … I was hooked. I told Whit that I needed to learn how to do it. Not only did he offer to teach me, he offered to put together a BGE for me with a custom built cart … that he made himself … done, let’s do it! A couple of months later, Whit delivers the BGE and I’ve been smoking up a storm ever since. I’ve made tasty pulled pork, baby back ribs that just fall off the bone, incredibly tender brisket, whole butterflied chickens with Hawaiian (Huli-Huli … compliments of my buddy John) and lemon pepper rubs … it’s been a lot of fun.

I miss hearing Lynn brag on my grilling skills and I know she’d be getting a kick out of watching me expand my culinary skills and watching me enjoy creating these “feasts”. Oh, what I would give to have her here teaming with me to throw together a party and enjoying these new creations.

A few months ago … I wrote a post “With a Little Help from My Friends”.  It was  about how through this incredibly difficult ordeal, family and friends have stepped in to help me and my boys endure it … and the support has been immeasurable. Friends encouraging me to “cook”; facilitating a BGE; and just chipping in to pull together a dinner are all examples of that type of love and support and I can’t tell you how much it means to me. So, one last piece of advice I’ll leave you with before the secret to the lemon pepper wings. Losing someone you love to suicide is as bad as it gets … but I encourage anyone going through it to open up to others … don’t hold it in … talk about it, talk about them … and accept the support.

OK, for the lemon pepper wings … here it is … cook them slow on low heat … lol! Or pay me a visit and I’ll make them for you! Cheers … happy cooking and eating!

Whisking up a brown sauce 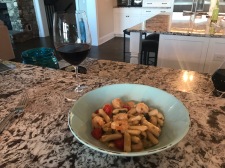 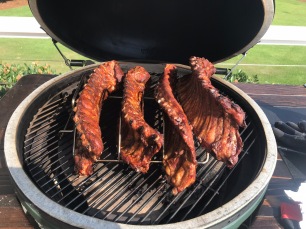 Fall off the bone ribs

One thought on “What’s Cookin’”